Walk, bike and drive safely along the Green Line

Explore the Green Line in videos and photos 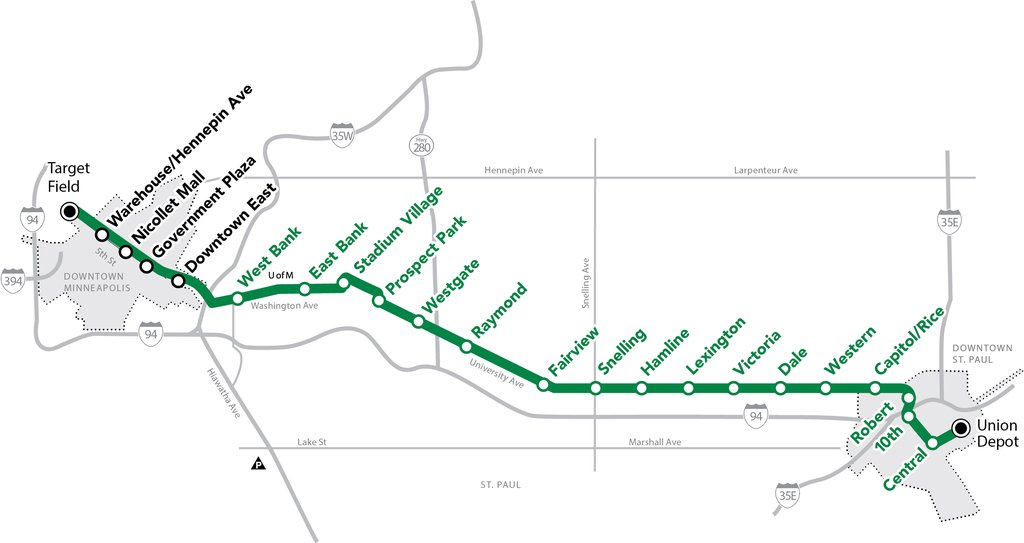 When the Green Line launches on Saturday, June 14, people driving, bicycling or walking along the 11-mile route can expect to see more police officers and stepped-up traffic enforcement along the line, which connects downtown St. Paul and downtown Minneapolis via University Avenue.

The road striping along the route and traffic enforcement signs are new in downtown St. Paul and along University Avenue, although they’re found in other parts of the Twin Cities along the Blue Line in Minneapolis and the Northstar commuter line.

Metro Transit officials say they want people to pay extra attention to signs and signals they may not have seen before.

"What we’re really asking people to do is pay attention to their surroundings," says Metro Transit Police captain Jim Franklin. "Watch the signs and obey the signs." The light rail travels through downtown Minneapolis on Friday, May 16, 2014. | Caroline Yang / For MPR News

There will be 22 police officers dedicated to patrolling the line and surrounding community.

For more information about safety along the Green Line and a list of all the signs and signals and what they mean: www.metrotransit.org/green-line-safety Passengers get off the light rail in downtown Minneapolis on Friday, May 16, 2014. | Caroline Yang / For MPR News

More on the Green Line:

- Sep 8, 2014 : An electrical problem is causing delays on the Green Line this afternoon, Metro Transit officials said. The agency is replacing train service with buses between the Downtown East and Raymond Avenue light rail stops. The problem is a broken pantograph, which connects the train to the overhead power lines, according to Metro Transit spokesman Bruce…

- Jul 2, 2014 : The new light rail Green Line between Minneapolis and St. Paul saw a 16 percent jump in riders during its second week of operation. According to preliminary numbers, last week 32,368 people boarded Green Line trains each weekday. That’s 4,500 more people than rode each weekday during the previous week, and well ahead of Metro…

Video: The Green Line, every station, end to end

- May 28, 2014 : The Green Line light rail may never travel as fast as this 3 minute time-lapse video but it's entertaining to imagine such efficient transit.

Disclosure: Minnesota Public Radio and the Metropolitan Council are negotiating ways to reduce noise and vibrations from the newly built light rail line outside MPR headquarters under a contract agreed to in 2009.